The City of Faisalabad

The City of Textile

Faisalabad was originally known as Chenab Colony, then Sandalbar and then Lyallpur. It was once part of ancient district of Jhang andSandalbar, a 5,000 square kilometres (1,900 sq mi) area consisting mainly of thick forests and inhabited by nomad tribes. The tract from Shahdara to Shorkot, Sangla Hill to Toba Tek Singh, was traditionally called Sandalbar. 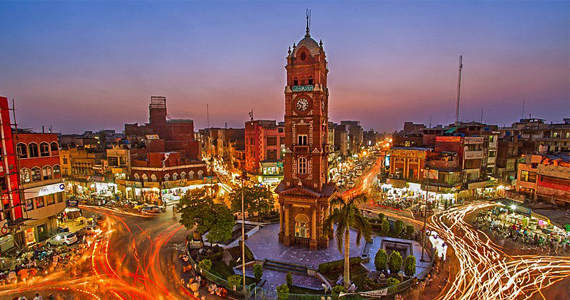 From the beginning of the 7th century Rajput kingdoms dominated the eastern divisions of Pakistan and northern India. In 997 CE, Sultan Mahmud Ghaznavi, took over the dynasty established by his father, Sultan Sebuktegin, In 1005 he conquered the Shahis in Kabul in 1005, and followed it by the conquests of some western Punjab region. Eastern regions of Punjab from Multan to Rawalpindi (including region of present-day Faisalabad) remained under Rajput rule until 1193. It was then brought under the control of the Delhi Sultanate and then the Mughal Empire. Faisalabad slowly developed and many Muslim Sufi missionaries converted the local population toIslam.
The city of Faisalabad carried out a census in March 1981 which showed the population of Faisalabad city as 1,092,000, which indicates that growth rate of Faisalabad city is only 3.37 percent per annum. In April 1981 the survey was carried out again which recorded the population to 1,232,000 which made the growth rate approximately 4.6%. Given this growth rate, the population at the end of 1981 was estimated to be 1,240,000.A Price water house Coopers study released in 2009, surveying the 2008 GDP of the top cities in the world, calculated Faisalabad’s GDP (PPP) at $14 billion. The city was third behind Karachi ($78 billion) and Lahore ($40 billion). Faisalabad’s GDP is projected to rise to $87 billion in 2025 at a growth rate of 5.7%, higher than the growth rates of 5.5% and 5.6% predicted for Karachi and Lahore. The textile industry of Faisalabad constitutes more than 65% of the textile export market of Pakistan, which itself forms 58% of total exports from Pakistan. This makes Faisalabad’s share of total exports from Pakistan more than 40%.

As per the directions of CM Punjab, the PPIC3 Centre of Safe City Project is under construction in Faisalabad. Other than the safety and security of the host city, this project is also a source of employment to Hundreds of Young IT Professionals who will be instrumental in changing the Police Culture with their enlightened and energetic efforts for a peaceful, prosperous and safer Punjab.