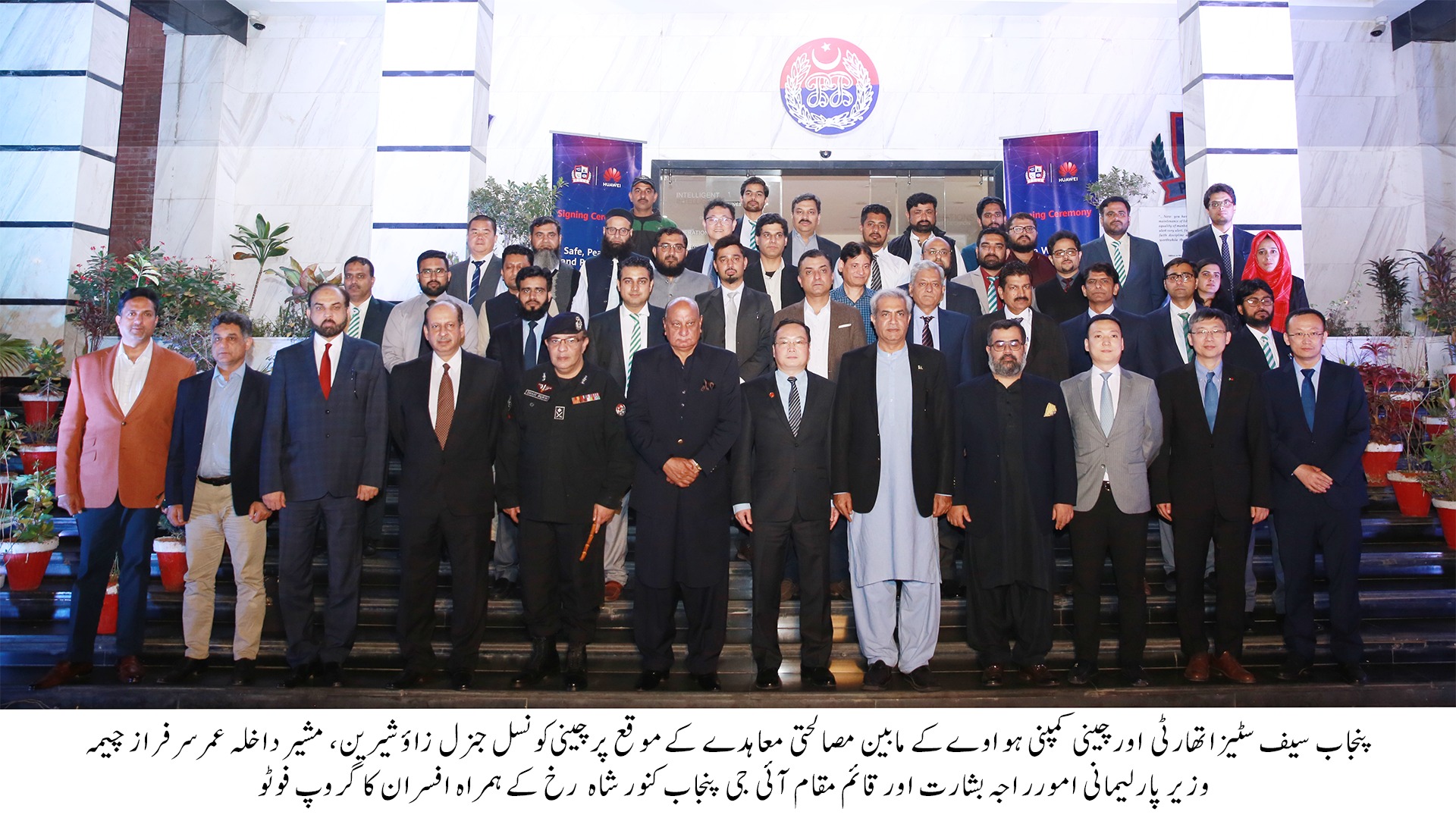 Punjab Safe Cities Authority (PSCA) and Chinese company Huawei have signed a settlement agreement here at the PSCA headquarters on Thursday. The Chinese company will be responsible to operationalize all of the PSCA infrastructure as per the settlement agreement. The Punjab government will not have to pay any additional amount and the Chinese company will carry out the maintenance works at previous dollar rate of Rs. 104 as per the initial agreement. According to the details, the Chinese Council General Mr. Zhao Shiren and Provincial Ministers, Adviser on Home Umar Sarfraz Cheema, Minister of Parliamentary Affairs Raja Basharat, Minister of Irrigation Col (r) Hashim Dogar were the chief guests at the occasion. Acting IG Punjab Kanwar Shah Rukh, Deputy CEO of the Chinese company Ahmad Bilal Masood and senior officials from Huawei also attended the contract signing ceremony. Speaking to media representatives on this occasion, Chief Operating Officer (COO) Muhammad Kamran Khan said that it’s a landmark achievement of Punjab Govt and Safe Cities to convince the Chinese company to agree to our terms and withdraw from all its demands. He said that the engineers of Huawei will come to Pakistan and make the project fully functional in 3 to 4 months. The COO said that the Chinese company will provide all the necessary hardware and software for the project at its own expense. He said that all the issues between the PSCA and Huawei have been resolved while the Punjab Cabinet has already approved the settlement agreement. Earlier, there were detailed deliberations on the agreement in the cabinet and sub-committees, after which we have achieved this milestone today. Mr. Kamran Khan said that Huawei will be responsible to bring innovation in the Safe Cities project according to the needs of modern technology and the PSCA will run the project with a new commitment in accordance with public aspirations. He said that PSCA is a national security project and a masterpiece of modern policing. After the Lahore project, the modern safe cities system was installed in Kasur and Nankana Sahib. In the current financial year, work is in progress on Mureed-Kay and Sialkot Safe Cities projects. Safe Cities Authority is also setting up a modern center in Rawalpindi as per the directions of Punjab government. In response to a question, he said that due to the proprietary solution of the Chinese company, it was inevitable to get the support of the company for the use of many soft-wares and hardware. In light of the agreement, all technical hurdles have now been cleared and the project is becoming fully operational. The COO said that he is truly grateful for the help of the Punjab government and the Chinese government to resolve issues between PSCA and Huawei. PSCA is determined to make the entire province safe with the help of the government, he added. Ahmed Bilal Masood, Deputy CEO of the Huawei Pakistan said that the company will provide all possible support to make the Safe Cities project fully operational. He said that PSCA is a state-of-the-art project which is playing an exemplary role in the eradication of terrorism, crime control and traffic management. Safe Cities is not only a surveillance project with cameras, but also a revolution of technology, data and analytics facilities.