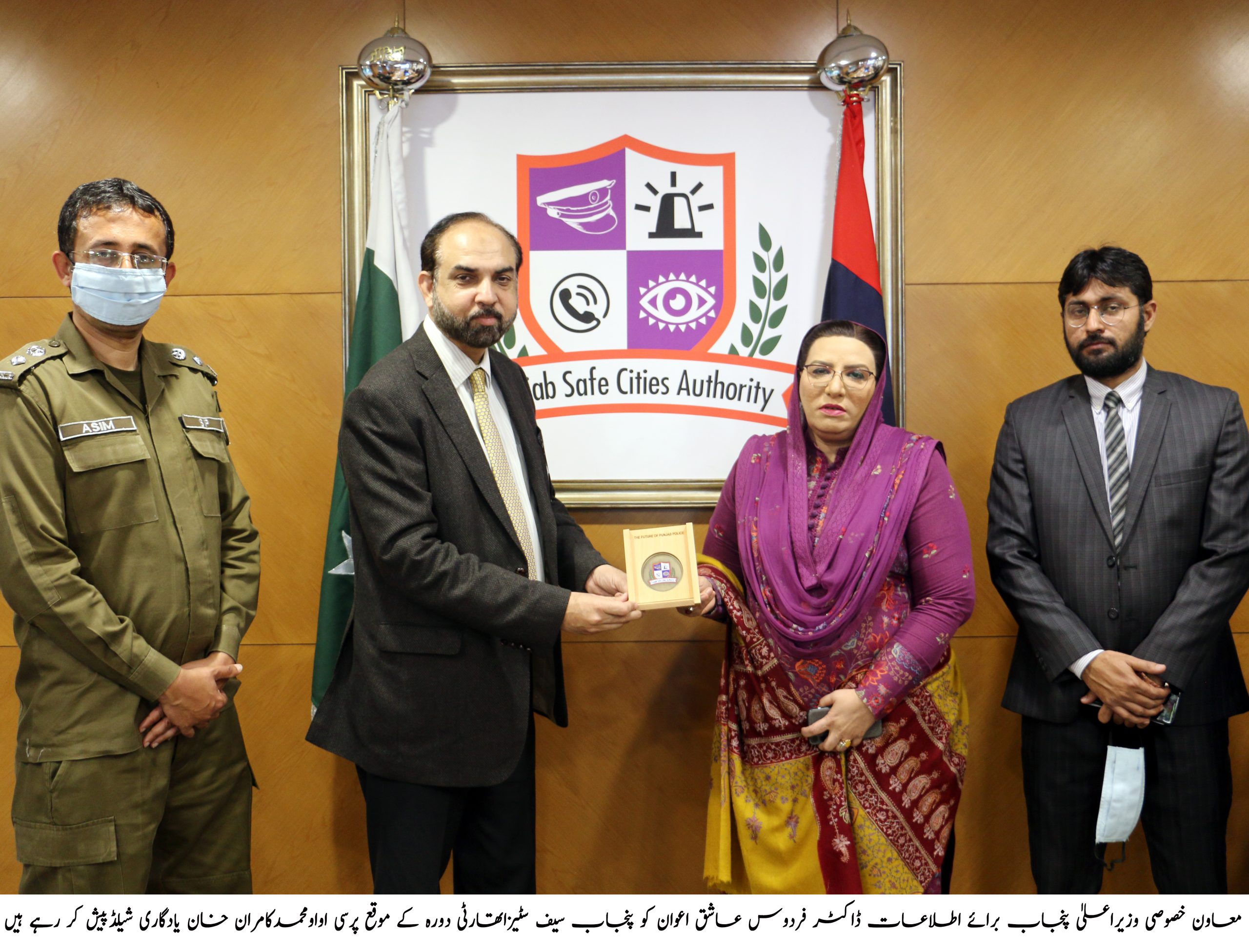 Special Assistant to Chief Minister on Information Dr Firdous Ashiq Awan has said that the Punjab Safe Cities Authority (PSCA) is a project of vital importance to continuously protect the lives and property of the people.

These views were expressed by the Special Assistant to CM during her visit to the head office of Punjab Safe Cities Authority established at Qurban Lines here on Tuesday.

Talking to the media, Dr Firdous said the PSCA by incorporating modern technology and methods aims to redefine the capabilities of law enforcement agencies and help ensure public safety. She said the Punjab Police Integrated Command, Control and Communication (PPIC3) Center has the support of law enforcement agencies to respond to any emergency. She said the project was launched with the installation of 8,000 cameras in Lahore which is being gradually extended to other divisional headquarters, adding that work is underway on the Rawalpindi and Nankana Sahib City projects as well.

In line with the vision of Prime Minister Imran Khan, the government is setting up Safe City Center in Nankana Sahib to provide security to the locals and the visitors, she said.

The Special Assistant said that 60,000 phone calls are received on ‘Pucar 15’ on the daily basis from across the province and police help is provided to the citizens timely. The PSCA received more than 15 million emergency calls in the year 2020 alone, she said.

Dr Firdous said the use of modern technology by the PSCA has improved the police response time and police is providing assistance to citizens in 10 to 15 minutes across the province.

With the help of the Safe City project, we have brought International Cricket back to our country and this most advanced and improved security system is being acknowledged by the security experts, she said.

The SACM said the CCTV cameras installed on city streets provide footage of dozens of incidents every day to assist the police in the investigation, adding that so far more than 7,000 audio and video recordings have been provided to police for help in the investigation process.

Dr Firdous said the PSCA has introduced an Electronic Challan System to regulate traffic in the city which has resulted in a 45 percent reduction in fatal traffic accidents, adding that a system of online payment of e-challan has also been introduced for the convenience of citizens through which they can pay their challans from the comfort of their home. It is satisfying that PSCA has also financially contributed to the national exchequer by depositing challan fee worth Rs499 million.

The SACM said the lost and found center under the PSCA has reunited more than 3,000 lost children and others with their families. Moreover, it is satisfying that PSCA has also introduced the ‘Pehchaan App’ to check criminal records of citizens and the ‘Women Safety App’ for the safety of women. Meanwhile, public awareness campaigns are run through official social media accounts and the first-ever web-based police TV in Pakistan. Alongside, the PSCA also provides assistance to WASA for rainwater drainage and Punjab Food Authority to control adulteration.

While talking about the ongoing political situation, the SACM said Maulana is suffering from the pangs of removal from power corridors. It seems that Maulana has realized and recognized his real political enemies and has updated his software as he has stated that he is not against the state institutions. She said the most neutral role played by the armed forces in the 2018 elections has unnerved the opposition as it has devastated their political designs.