The City of Multan

The City of Saints

Multan is a city in the Punjab Province of Pakistan, and capital of Multan District. It is located in the southern part of the province, and is steeped in history. It has a population of over 3.8 million (according to 1998 census), making it the sixth largest city in Pakistan. It is built just east of the Chenab River, more or less in the geographic center of the country, and about 966 km from Karachi. 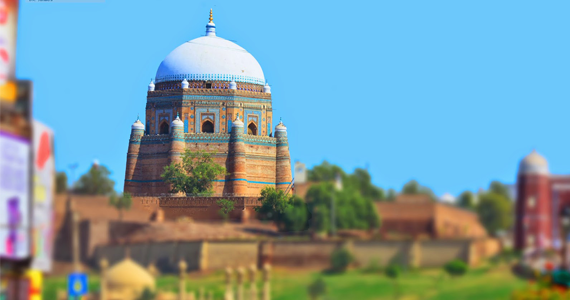 Multan is known as the ‘City of Pirs and Shrines’, and is a prosperous city of bazaars, mosques, shrines and superbly designed tombs. The Multan International Airport connects to flights to major cities in Pakistan and to cities in the Persian Gulf. The city’s industries include metalworking, flour, sugar, and oil milling, and the manufacture of textiles, fertilizer, soap, and glass. Multan is also known for its handicrafts, especially pottery and enamel work. One of the subcontinent’s oldest cities, Multan derives its name from an idol in the temple of the sun god, a shrine of the pre-Muslim period. The city was conquered (c.326 BC) by Alexander the Great , visited (AD 641) by the Chinese Buddhist scholar Hsüan-tsang, taken (8th cent.) by the Arabs, and captured by Muslim Turkish conqueror Mahmud of Ghazna in 1005 and by Timur in 1398.

In the 16th and 17th century, Multan enjoyed peace under the early Mughal emperors. In 1818 the city was seized by Ranjit Singh, leader of the Sikhs. The British held it from 1848 until Pakistan achieved independence in 1947. Landmarks include an old fort containing the 14th-century tombs of two Muslim saints.

As per directions of CM Punjab, PPIC3 Centre of Safe City Project is under construction in Multan. Other than safety and security of the host city, this project is also a source of employment to Hundreds of Young IT Professionals who will be instrumental in changing the Police Culture with their enlightened and energetic efforts for a peaceful, prosperous and safer Punjab.